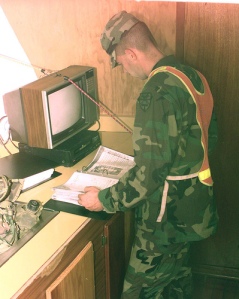 About a week ago I finished reading Little Bets: How Breakthrough Ideas Emerge from Small Discoveries. I did not find it particularly novel as most of the research mentioned in it was familiar to me from other readings. However, it does  contatin some compelling anecdotal examples.

One thing that did struck me as interesting are the parts where the author describes some of the changes initiated in the U.S. army due to its initial failure in Iraq. The author describes how during the cold war the army was trained to fight the Russians in a one-off huge war where the strength of each army will tested in a predictable way. This meant that the army trained in a certain way:

One of the main ways the army did this was to require soldiers to essentially memorize checklists. In army terms, these are called “doctrinally approved solutions.” Military doctrine enables the army to manage its operations across a large organization. Because fighting the Soviet Army allowed for such a small margin of error, approved solutions detailed how to solve anticipated battlefield problems with precision and efficiency.

However, when the U.S. army reached Iraq, the “doctrinally approved solutions” (I love this term!) turned out to be irrelevant due to the ambiguity, complexity and uncertainty of fighting an insurgency in highly populated areas. So today, it turns out that training focuses on understanding the culture, the ability to study the terrain (both physical and in terms of the population) and on adaptive strategies.

In essence, from a rule based, top-down approach, making soldiers into memorizing cogs, the army had to turn into a creative machine that provides soldiers with a foundation and trusts them to use judgment and adapt to the situation in the field by connecting with local population, understanding the difficulties the specific context demands and leveraging learning and experimentation. Since the army started implementing this strategy its success in securing cities and defeating insurgents has risen tremendously.

I think this story has important lessons for every organization. If an organization as hierarchical as the army understands that using rules and turning people into cogs is not going to work, what does it say about modern organizations competing in highly competitive highly adaptive markets?

Yes, training people to think by providing them with the right foundation is harder than just drilling them to memorize pre-approved actions. This easiness has its price. It doesn’t work.

So, does your organization have “doctrinally approved solutions”?